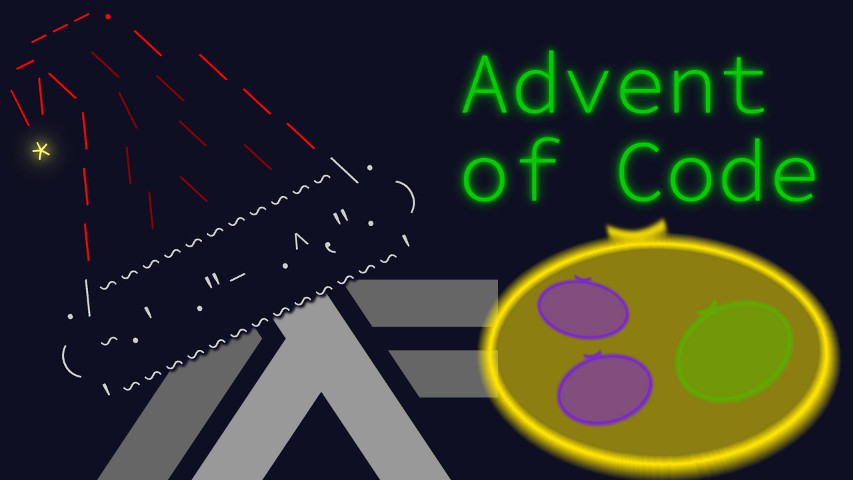 Fair warning: this may not be my longest code of the year, but I do consider it the most overengineered. Today’s challenge is to extract various metrology information about a distinguished bag in a graph of bags. I’ll proceed in literate Haskell, with a few extensions and imports.

The puzzle today defines a directed graph with labeled edges. Nodes are bags, labeled by color; edges define how many bags of each color a bag contains, directed from container to contained. We’re always going to consider the graph from the perspective of a distinguished node: the shiny gold bag.

It follows from the puzzle assignments there cannot be a circuit in the subgraph generated from the shiny gold bag, as that would mean an infinite number of bags for part 2, which doesn’t quite fit the format. I don’t see anything preventing circuits in the rest of the graph: it wouldn’t invalidate the reasoning for the part of the graph examined in part 1, and if there’s a disconnected subgraph in there somewhere, so be it.1

I don’t recall encountering any in my input though.

Part 1 asks to count the number of bags “left” of shiny gold. Part 2 asks to sum the bags counts “right” of shiny gold, weighted by the edges’ labels.

All in all, part 2 is actually quite straightforward. It’s part 1 that requires a bit of thinking before diving in. The sane thing to do on the general case is to invert the edges’ direction and DFS. But the graph is quite small—mine is 594 nodes broad. So it’s IMHO easier to just DFS over every node. In the absence of loops, that search doesn’t even need memory: the graph can be considered a tree with no ill effect other than some wasted time. So it’s easier to just tree-fold over every node. This actually extends to part 2.

My complication of the day, by personal choice, will be to implement the folds using recursion-schemes. So I’ll need a base functor.

My edge labeling is a simple integer, with multiplicative semantics, so I implement with a Times type and the appropriate fold.

The input is given as a series of nodes, one per line, with all out edges. This happens to fit the graph’s base functor quite well! I can store it in an intermediate representation using said functor directly.

Now to parse. This input is in the middle of that gray area where I could use split/list combinators or actual parsers. I’ll settle for Parsec this time.

As said earlier, each input line is an entry with:

As far as this puzzle is concerned, a bag is isomorphic to its color.

The “contained” part of the line has a bit of special casing for when it’s empty.

And here are two helpers to conclude the parser.

And an actual wrapper…

So I’m now able to parse the input to a list of “entries”: colors representing bags pointing to other colors. That’s not a graph yet, I still need to tie the loop from a node to the next.

I don’t have a workable notion of a root here, so I’ll just represent the graph as a list of vertices.

I can keep the list structure and convert entry-wise.

Building the graph from a seed node is an anamorphism.

The seed is already in VertexF form, so I can use the functor instance to convert it in-place.

Implenting it by fetching a VertexF Color Color from where I have them: the entries list.

This works. It’s probably not smart enough to deduplicate the subforests on its own, though. Not that it would be needed to solve the problem.

Minus one because the folds are inclusive, i.e. they count lax containment, whereas the problem asks for strict.

Oh, and I need to specialize the folds for my structure because for some reason there’s no automatic Foldable instance.2

I use this helper; I’ve extracted it to toplevel because it’ll come in handy later on.

At any rate, it works.

Here’s my main so I can run it on my puzzle input.

A bit under a second to solve for my puzzle input. So yes it works, but still rather inefficient. The obvious cause being the fact I treat a dense graph as a forest, taking no advantage of the fact some nodes are encountered numerous times from different paths.

In this post, I’ll only push a little further: constructing the graph with sharing.

Recall that I’m constructing the graph vertex by vertex by anamorphism, where each vertex is recursively expanded by generating its own subforest. For example where a shiny gold bag contains dark olive bags, I’d construct a dark olive node as a descendant to the shiny gold bag, and an additional node when encountered independently in the bag list.

To share the constructed vertices, I’ll store them in a list and fill in the subtrees by looking up in there instead of the original entries list.

The graph is still a list of vertices. I can still construct it by mapping over the entries.

This time I won’t use the anamorphism; I’ll use the functor directly.

Doing so halves the total runtime. To make any more progress, I’d have to implement the measurements as actual graph operations instead of tree folds. Which is pointless, since this problem is already solved.

This concludes this installment of today’s solution. See you soon!