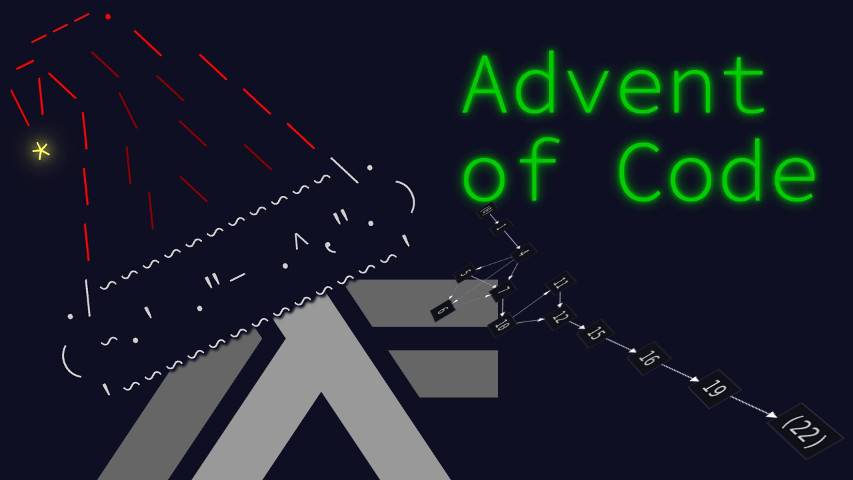 The challenge today is a nice opportunity to go Bird-style with code simplification. So let’s try it out, with Bird-tracked literate Haskell to boot.

Part 1 asks to compute the sum of joltage differentials each adapter would be subject to if we chained all of them from lowest to highest between the outlet and the device.

I’ll use the most underrated algorithm in computer science: sorting.

You may notice I’m not only ignoring 2s, but actually actively pattern-matching against them. I happen not to have any in my input.

Instead of restricting the number of way the adapters are chained to a single arrangement, we’re counting all of them! And there are a lot.

How could I count them? The natural way is to enumerate them with pattern-matching and recursion.

In plain English: the combinations function maps a (sorted) joltage list to the number of ways to combine the matching adapters. It proceeds recursively:

For non-empty input (which mine is), it’s easy to convince oneself this will indeed terminate: there’s a base case, and each recursive call shortens the input list by one.

Let’s actually try it on the first example.

So far, so good. How about the second example?

I’m skipping actually printing them all because it’s starting to get a bit long, but I’ll assume they’re all good.

Unfortunately, it won’t go much further with this approach. The reason is quite simple: at each recursion point, we have a maximal branching factor of two. In broad strokes, this means the total running time for N adapters could be the double of the running time for N − 1 adapters. This is an exponential algorithm, it will only make sense to use it for very small Ns.

Since the result set is going to be too big to enumerate, I’ll first convert the algorithm to count the arrangements instead.

I dropped the error checking because I now trust myself enough not to call it with unsorted joltages. I can verify it yields the same results:

It still takes too long, though. Consider that 19208 result was constructed by summing only ones and zeros.

So how do I make it faster? The key observation is that it’s performing the same work multiple times. It’s not directly apparent with this wording of the definition, but notice that the takeJ2 recursive call is actually a call on the function argument’s tail.

Let’s rewrite, avoiding to cons any list that isn’t a tail of the original input.

There’s still nothing reusable, for now it’s just a different presentation of the function’s calling convention. But I can lift the guard clause up to the recursive callsite by factoring the calls.

This still works, but it’s worse than the original: it traverses the list of tails entirely for each position, whereas the previous implementation short-circuited as soon as the gap got too big. So I’m somewhere between O(3N) and O(NN). But this is fixable.

(whileMaybe is a variant of mapMaybe that short-circuits on first Nothing.)

Ok, I’m back on track. To optimize this some more, I’ll observe the recursive call is performed on the tails of the current sublist. This is the wasteful operation. Now’s the time to perform the actual dynamic programming tranformation.

This was a mechanical conversion. The former return value of the recursion, n, is returned as the head of the result of the fold. References to it now point to its place in the fold’s right-hand side. The fold constructs the entire list of results, since they’re needed to compute the result at each point. I needed the tails too, so they’re returned and maintained there as well, as the second part of a pair.

Not too satisfying, though. It’s a bit ridiculous to maintain the list’s entire tail at each point, for one. Remembering the joltage there ought to be enough information.

The quickest win is stack. For now, the computation is constructed as a chain of dependencies from the first element to the last, from which it “bounces” back, constructing the results and tails on the way back. This is because the conversion stems from the recursive calls, who also presented this two-way traverse pattern.

But the computation in itself is symmetrical. Let’s rewrite it as a left fold.

This was mechanical as well: flip the arguments to go and swap all occurrences of to and from.

Let’s pretend1 the foldl' strictness extends to both members of the pair: the algorithm is now constant stack, O(N) time and space.

The final observation is that since the joltages are distinct and ordered, the whileMaybe call will never need to peek at more than 3 of them for the guard to remain valid. So instead of constructing the entire list of values as I go, I can restrict it to three elements.

I’m shoehorning the joltage in so I can get rid of the pair and benefit from the record’s strict fields.

(Note that providing the initial 0 joltage for the outlet is no longer needed: it’s a part of the initial Combinations record.)

Ta-da! The code is now constant stack and space, still linear time. It seems unlikely it’s possible to do better than linear time if we want the result to depend on the input.

It’s debatable whether or not this constitutes an actual improvement: there’s quite a bit more number shuffling going around whereas the previous implementation was closer to very straightforward consing. The cost of latent RAM usage is to be pondered against the increased reliance on the optimizer.

As always for all things optimization: measure!

This concludes today’s solution and improvements. See you soon!