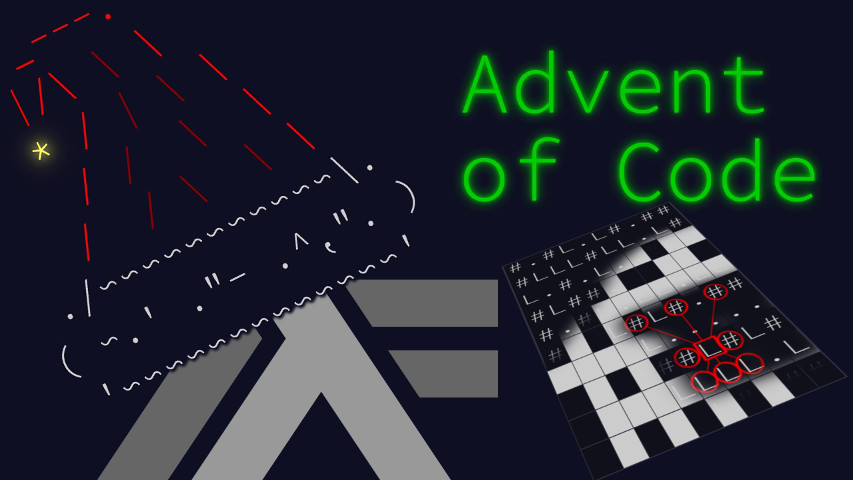 AoC day 11 is the day of the cellular automaton.

This post is mostly literate Haskell, except I have no idea what I’m doing.1 So… let’s see how this goes!

As is customary, here’s five pages of language extensions and imports that you may freely skip over. I simply haven’t found the proper way to conceal them yet. Not that I’ve tried too hard. Yet.

The summarized topic of the day is to take a snapshot of a cellular automaton after it converges. The automaton ruleset is the same between both parts; what changes is the topology.

Let’s start by converting the input format to something tangible. I’ll simply represent the input as a two-dimensional array of booleans, telling me whether there’s a seat there. Array dimensions are taken from the number of input lines and the width of the first one. I won’t do any involved error detection as the input is unique and most likely correct.

I want iteration to be fast, as there are going to be multiple of them. So I’ll represent the environment as a mesh of STRefs, with nodes mapping to seats. Each node will hold the following information:

With this node type, my environment state is simply a collection of them. A collection that doesn’t really need any structure at all, so I’ll just use a list by default.

With this set up, I’m ready to write the generation iteration.

This specific cellular automaton doesn’t distinguish among neighbors, so all I need to make available to the rule function is the number of active neighbors.

On this year’s automaton, I expect the stabilization to manifest as an absence of change from a generation to the next. An easy way to make that apparent in our “mutable reference mesh” model is to split the traditional update in two steps:

This allows me to peek in-between and verify whether or not there are actually any changes remaining. It has the added advantage of not touching the rule’s input generation before all of the changes have been computed, which avoids that class of bug. (The counterpoint is the short-term memory consumed by the change log.)

I still need an actual rule to be able to run this. Let’s write one for both parts 1 and 2.

Oh. There’s one thing I forgot. To run all of this, I also need a starting environment. That’s where we will observe most of the difference between parts 1 and 2.

When I first solved the problem, I deliberately didn’t use any smart, let alone sane datastructure to do so. I used the much-maligned lazy character list-based Haskell I/O as is, resulting in worse-than-suboptimal, quadratic algorithms. I didn’t care because the input size is small, and this is only be performed once anyway.2

It’s kind of trivial to port it to arrays and not publish crazy bad code on the interwebz, so I’ll spare your eyes and improve performance in one stone.

The structural difference between parts 1 and 2 is which seats qualify as neighbors when computing the rule. In part 1, the seat neighbors are those of the 8 neighboring places that have a seat on then. In part 2, the neighbors are the first seat encountered when radiating from the seat at hand in the 8 cardinal directions, up to one per direction.

To construct our mesh, I’ll tie the knot over an internal/temporary map from position to STRef. My live solution actually used the RecursiveDo extension, but this doesn’t really win anything meaningful, so I’ll keep it simple here for further readability.

Now, what did the puzzle request as an output? The number of occupied seats. That’s rather straightforward to compute.

And I can now package the complete chain!

The rest is just boilerplate…

…and a small helper.

To summarize: I took a bottom-up approach, building up my cellular automaton environment as a mesh of STRefs, over which I computed and serialized a list of changes per generation.

This concludes this day’s solution. I hope you learned something along the way!