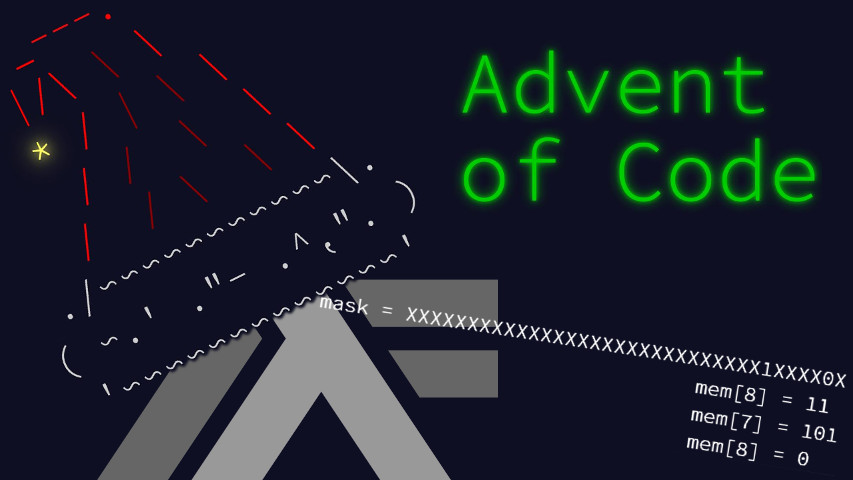 Advent of Code’s day 14 presented the rare feature that it made me punt altogether on sharing code between both parts, and just copy-paste my code to a new file to alter it.12

Now the time pressure is off—and I have perfect knowledge of what’s in both parts—let’s take a fresh look at it and attempt to do it all at once. Starting with the standard literate Haskell prelude.

So what’s expected? We’re given a file in the following format:

…and we must interpret it in two different ways:

What makes it intrinsically interesting? Data representation. The addressable RAM space is 36 bits, so just a bit beneath 7 × 1010 slots. Slots are 36 bits wide as well, so we’re looking at 36 × 236 bits of addressable data. That’s 288 GiB. It’s more than I have, so direct simulation is off.

My input file is 500 lines, shared between 100 mask changes and 400 memory assignments. So for part 1, I can safely assume at most 400 of these spaces will contain a value, and I can implement the RAM storage with a simple IntMap.

For part 2, it’s more subtle. The masks may fan out and interfere a lot with each other, in which case I’d be stuck between the full 288 GiB representation and scratching my head real hard before finding an adequate representation. Or they may remain mostly focused and the part 1 representation still copes.

We can get an idea of the spread by counting the Xs per mask: each X doubles the number of addresses.

What can I share between both parts? Here’s a few.

Let’s start with the real easy one, RAM representation. I already decided to go for an IntMap in both cases. 36 bits of data need an Int64 at least. I’ll just use the standard Int, as my system is 64-bit.

Ok. Now the general linear processing logic. Squinting a bit, I have two operations to define: a mask assignment operation and an addressed memory assignment.

The mask assignment is likely going to be different between both parts, as I may not want to represent the mask the same way, since it behaves so differently in both.

Then the addressed memory assignment operation. That one might be more shareable. Squinting a bit more, it takes an address and a value, applies a transformation to both, then writes the transformed value to the transformed address. The latter not necessarily remaining singular.

This sounds pretty close to what optics do. Except I’m no good at them.

From what I know, a lens is a getter/setter couple. Except we don’t ever need to “get” using the masked logic, so I can probably skip the getter if it makes things too complicated. The “multiple slot access” sounds Laarhoven enough to me, but I don’t know for sure if it’s compatible with the lens view or if I have to look for some other glass widget.

[Cue me scrounging through the documentation]

You can also write to setters that target multiple parts of a structure,

YES!!! That’s what I had in mind! Now to assemble it properly…

The way to write memory changes each time the mask changes.3 That’s a good sign the setter kind of “is” the mask. In other words, I’ll be converting each mask assignment to a lens of some sort, and use it for the subsequent updates.

Let’s start with the multiple write, as I suspect it’s going to be the most complex part of it. Browsing the lens package, many data types from base seem supported, but unfortunately not the IntMap I had in mind. There is a Data.Map.Lens, though, maybe if I downgrade my type, I can use it?

One of most commonly-asked questions about this package is whether it provides lenses for working with Map. It does, but their uses are perhaps obscured by their genericity. This module exists to provide documentation for them.

Oh. This may be a fear for the Data.Map users, but it’s definitely reassuring for me and my IntMap.

On the other hand, it’s all about modifying pre-existing values, and this doesn’t apply in my case, as the whole point of using a map is that I’m trying to avoid inserting the complete set of 236 keys. So I need to find how to insert before anything else, or this won’t fly.

After some more browsing, I stumble upon Control.Lens.At.at, that seems to do exactly that. Ok, the building blocks are here, let’s get our hands dirty!

That covers inserting. Now let’s try for multiple values access. After some more searching, the way to go appears to be Monoids.

Mmm. I can manage a multi-value read, but my writes consistently fail to update more than one value. Looks like I’m going to have to seek outside help.

Also, my RAM accesses returning Nothing is only an artifact of using a sparse map in place of a full array. I ought to adjust for that.

Except it triples my runtime. Possibly because it loses the “strict” aspect of my IntMap.

In the meantime, back to basics to try and update multiple slots. There’s this promising function in Control.Lens.Setter I can likely put to good use.

Damned. Looks like I reimplemented at, but still failed at multi-update. Let’s try again.

Let’s package that into a convenient function while I still remember how I did it.

Verification before moving on…

No, wait. The actual “correct” way has just revealed itself to me, after I’ve read most of the lens documentation 15× I just stumbled upon Control.Lens.Unsound at last. And it has all the missing bits I wanted. Unsound but correct. At last!

Except it doesn’t work. I’ll spare you the compilation error and some of the detail. It took weeks of trying and a StackOverflow question to get it upright.5 But I have it now, I’m holding on to it!

Moving on. I’d like to perform the changes using a single lens operation. That ats function seems like the right abstraction, except it builds a Traversal when I only need a Setter. In that vein, I’d like a setter that takes an address as its input, and focuses on the addresses that make sense in the current context.

The list of addresses to write can’t be known at the time the mask is parsed, as it depends on the given address. What is known is the function to convert an address to a list of addresses. So I can construct my setter at parse time, by composing my ats combinator with that function. Problem solved! Implementation deferred, as I’d still like to share the parsing with part 1.

Let’s study the specifics of part 1. Here we have direct addressing, so at is indeed the perfect match. And I’d need to hack together a setter that modifies the value being written. This shouldn’t be too much of a problem, using setting as before, this time without changing the level of the setter’s focus.

Well, well. I do have everything I need as far as lens operations go. Now to put the icing on the cake, I’d like to reduce the processing to a single operation per memory write input instruction. For both parts at once.

This sounds close to arrow combinators, and indeed the overA one hits pretty close. But not perfect. Next hunch is that it’s yet another multisetter, this time deferring to two inner setters, providing them with the same value. So maybe something more like applying a value to two setters in a reader (->) monad.

Let’s try to type and implement it.

Wow. That compiled. Let’s try it, just to be sure.

After I found adjoin in the unsound subpackage, I realize I could have spared some work with lensProduct. But at least this time, I got what I wanted independently, so I’ll keep it and not make this post even more confusing.

I’ve exhausted my entire “what-if” list. There’s nothing left to do but implement.

To construct the setter, I’ll convert the parsed mask to two masks for part 1 and more for part 2.

Probably more Setter vs ReifiedSetter woes. I’m at peace with those now.

I’ll perform all operations directly from the parser, using Parsec’s state to store the current Write. That state will be updated each time a mask assignment is parsed.

With that state, the program will thread a dual RAM as the monadic return value of each instruction.

So each instruction is expected to return a dual RAM modifier function.

Setting a mask doesn’t alter the RAM yet, so it returns id.

The mask is parsed bit by bit.

Each bit contributes some update to the writer’s settings.

I like how mempty serves as a perfectly acceptable substitute for (mempty,mempty).

With the writer in the parser’s state, I can now write the memory assignment operation’s implementation “naturally”.

It is now my greatest pleasure, ladies and gentlemen, to present to you the following next two lines. This entire post’s raison d’être, seeking, mumbling, exploring, cursing and overengineering, is to put myself in such a position to be able to write them as such.

The main wrapper uses a dummy initial mask. I’d normally use a call to error instead, but Parsec’s state is unconditionally strict, and it would bring yet more complexity to wrap it lazy again, and for little gain. Just don’t feed the program inputs that don’t start with a mask assignment, ok?

The rest is helpers and support.

This concludes “today”’s solution. A month into the making.

It’s brutally inefficient—it solved my case in just over four minutes—yet it worked on the first try. And I got to understand way more than I set up to about lenses’ nitty-gritty.

It also concludes the series, being the twenty-fifth solution I finally get to publish. I’ll write a recap as time permits.

I hope you enjoyed reading about my lenses journey. See you soon!