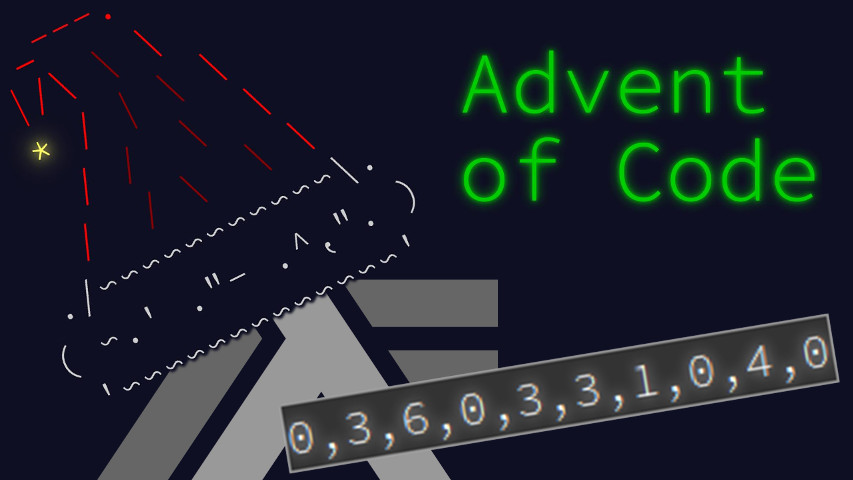 Day 15 part 1 presents us with a classic “implementation” problem. We are to generate an integer sequence, with a starting (multiple-number) seed, and a simple rule to define the next integer: it’s the distance between the two previous occurences of the last number.

As such, it doesn’t ring a bell just yet1, but the definition is clear enough. And I only need to compute 2020 terms, so there’s not much to worry about: a straightforward implementation is a valid way of proceeding for now.

AoC is in the morning for me, so the coffee hasn’t really kicked in yet. I don’t have the perfect data representation that springs to mind by reflex. Not to worry, I can use top-down compile-error-message-driven design.

It complains about LambdaCase not being active and forM_ not being defined. That’s easy enough to fix.

The remaining errors are:

Let’s start with the latter. How would I extract the previous number’s age? Let’s start simple.

Ok, that was a cop out. It seems reasonable enough to maintain some state that remembers the last number played as stLastNum. It seems a bit less reasonable to remember every number’s age as the game goes, since I’d have to update it all the time. Better keep track of time instead, and infer the age.

We’re getting a better understanding of the state’s shape.

Let’s continue with play. A reasonable way to “say” a number would be to simply output it to a Writer monad instance. The interesting part is how to maintain the state as it goes.

That looks like it could work! What I’m missing now is actually defining the St structure with the fields listed in the error message.

All of the “variable not in scope” errors are gone. All that remains are complaints about the type being ambiguous. This can be addressed by defining a wrapper to run the game as a pure function.

Let’s try it on the example!

Something’s wrong. The expected answer is 436!2 What did I miss? Let’s trace the actual first few values.

The first three numbers are correct. Whew! But then it seems like I’m not only failing to output the correct next number, namely 0, but additionally the logic is getting stuck in a loop.

The reason for this is actually quite simple if you trace the algorithm. When the third and final starter number, namely 6, is played, it is added to the history map as having been played at turn 3. But when I request its age using the lastNumberAge function, it will compute the age difference between the turn being computed, namely 4, and the turn I just stored in the map, resulting in 1.

The next number computed makes the exact same mistake, hence the loop. Oops!

So the root cause is that with the current algorithm, I never have the last number played’s previous two dates available at the same time. So I can’t compute a valid difference. To correct this, I’ll shift the computation of the last number’s age to when I still know its previous date.

So I’ll replace the stLastNum state field with stLastNumAge, and move the computation to the play function.

Much better. I ran it with my puzzle input, got my gold star and unlocked part 2.

Part 2 was about doing the same thing 30 million times. Well, it’s not that big a number, especially for offline processing. My code is already O(NlogN),3 there’s not too much point optimizing it before I at least get an estimate of how long it will take.

As it turned out, it needed less than 45 seconds to compute when compiled. Less than two minutes interpreted.4 So really not worth the engineering time to reduce to linear or better. Maybe some other time.

This concludes day 15’s solution. Here’s the full code, with the additional simplifications of: