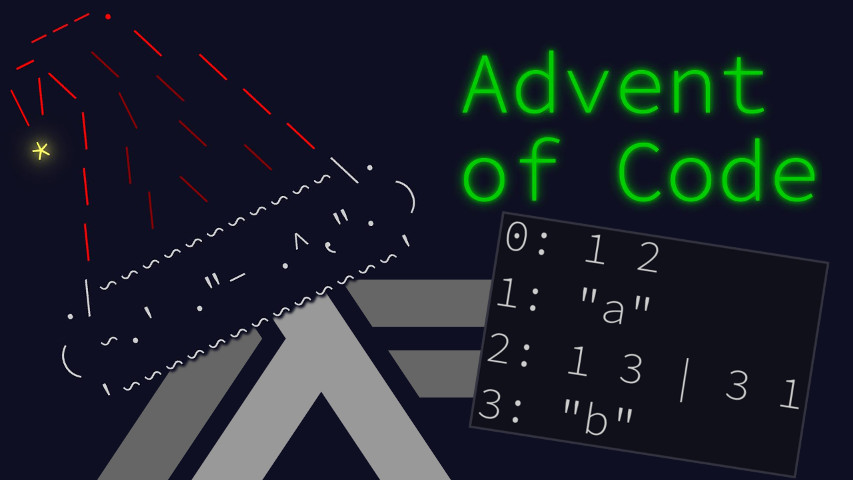 Today’s problem is a simple language verification. Well, “simple” as in “simply defined”. This post is literate Haskell, so let’s get the program header out of the way so we can talk business instead.

We are provided with the language grammar and some messages. Let’s run some statistics so i have a better understanding of where I’m going.

There are many angles of attack to the language decision problem. Getting a feeling of its structure goes a long way towards choosing the right path. (I don’t want to implement CYK! It’s too abstract to be fun.)

Let’s parse and analyze the grammar to get a better feeling of it. Starting with a few type definitions.

That NonTerminal type needs commenting. From the statement, and matched by my input file, a nonterminal production is a choice between one or more sequences of recursive productions. I represent it as a list of lists of Integers. The integer is a recursive rule referenced by its index; the inner list is the sequence; the outer list is the choice.

Let’s parse. This seems like the simplest grammar I’ve drawn Parsec for to date. If you’ve been following this series, you shouldn’t need much hand holding anymore.

For ease of REPL, let’s package it into an environment structure from which I could easily address the fields with NamedFieldPuns or RecordWildCards.

I1 have a small number (461) of queries to perform, so I can probably afford a complex and/or suboptimal per-message algorithm. On the other hand, I have 133 rules, which is large. From the cursory glance at the actual messages, who seem to be binary2, I’m looking at an approximate worst case of 2131 ≈ 2, 7 × 1031 productions. The statement is right in saying it’s finite. It’s still not tractable.

This gives the grammar a nice ring structure. Let’s make a typeclass out of it, see if I can exploit it later.

Now let’s express the language word count in terms of it.

With this setup, counting the words is now only a matter of converting the grammar’s set of rules into this structure, recursively dereferencing grammar rules by index. I’m representing the recursion with an explicit input parameter, so it can be externalized and acted upon depending on context.

And here’s a wrapper to:

2 million words… that’s not so bad. It’s small enough that I could just generate them all to put in a set structure to verify each message against.

How will I generate them? By exploiting the ring structure again.

The wrapper helper looks very similar to the counting one.

The language set’s size is the exact same as the number of production. It’s not too important as both are tractable, but it does mean the grammar is unambiguous: any word from the language it produces can only be produced in a single way.

Now I can efficiently count the number of valid messages and glean my gold star.3

Part 2 introduces loops in the grammar. What does that change, concretely?

With the path I took for part 1, it changes a lot of things. The language’s cardinality is now infinite. It could not be efficiently computed as I did earlier, since the map’s value at index 8 would be a strict function of itself, which isn’t well-defined for any of the evaluation models GHC provides.

I’m going to have to change my approach.

This hints at something. What class of languages can be inductively defined by atomic primitives, concatenation and choice? That’s the definition of regular languages!

Regular languages can be validated by an NFA derived from their grammar. Said NFA can either be simulated, or replaced with an equivalent DFA, with whom validation is even more straightforward.

Or I could just be efficient and express the language as a regular expression to let a specialized library take care of it. The conversion is just as mechanical as the previous two I’ve detailed.

I’m delegating parenthesizing to the wrapper, to ease the bracket load. This makes use of the fact there’s a maximum single level of choice per rule.

Let’s check this is actually equivalent to our previous way of doing.

So now all I have to do is patch up rules 8 and 11 and launch the generator again, right?

Letting the generator loose on a recursive definition is the same recipe for disaster I would have had if I’d tried to count or enumerate the recursive language: it’s not well-defined either. The GHC runtime can do of decent job of detecting it and aborting when run single-threaded, but it’s still not going to give a useful result.

Instead I’ll patch rule 8 by hand. The PCRE syntax for a nonempty Kleene star is a plus character.

The bad news is, this makes it not a regular language anymore. The good news is, PCRE handles it just fine anyway.

The syntax to invoke a recursive pattern is normally (?N), where N is a relative pointer to the targeted capture buffer. But that’s going to be unwieldy here where the regex is generated: I don’t want to have to count the number of opening parentheses that occur between pattern start and recursion. So I’ll use a named pattern and reference instead.4

And this solves part 2.

I’m not aware of a way to make Parsec backtrack over the choice point after a successful first alternative match. I could reorder rule 8, but there’s no saying that sort of situation doesn’t happen elsewhere, or indirectly. Maybe I could rewrite the rules in a way to fit the model, but it would be quite the endeavour for dubious results whose validity I wouldn’t be so sure of.

But there’s a choice-symmetrical parser combinator library in the base distribution that fits: ReadP. Its interface is almost the same and I can generate a parser for it as easily as a regex or a full language:

Sure enough, it yields the same results as PCRE.

Here’s the rest of the code for completeness

This concludes today’s solution. Hope you liked it!