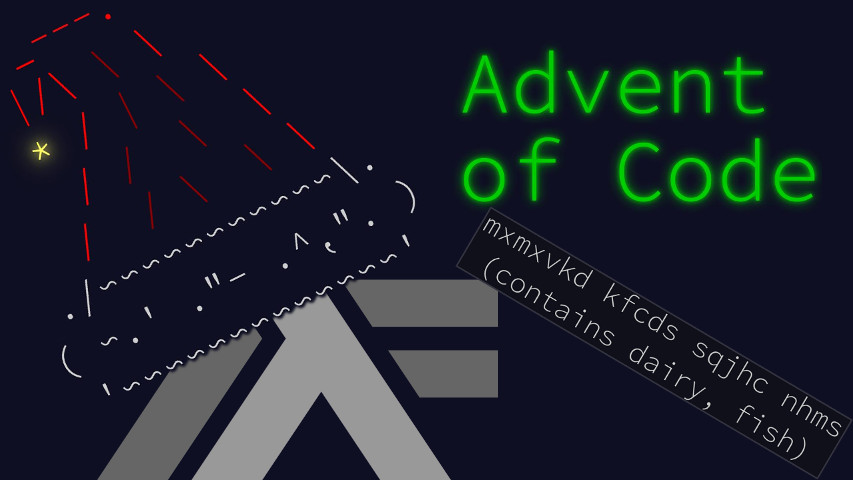 I almost had a panic attack when I got to today’s challenge. It’s early in the morning1, half of the Internet is laughing at how easy today’s puzzle is in comparison to yesterday’s… and when I read the statement, all I can see is an intractable high-variate constraint programming task, whereas yesterday was quite approachable.

This post is a literate Haskell program. Please skip over the imports while I go grab myself a cup of coffee.

I’ll use a simple line-based Parsec parser. Not that that much power is really needed for the input format, but I’ve been writing them all month, so it’s currently my best choice in terms of whipuptitude.

You’ve been reading my parsers all month long as well, so there’s really not much to comment on anymore. For a summary, the input is a list of recipes.

A recipe formalizes a relation between a list of ingredients and a list of allergens. There’s no expected repetition, I’m storing as sets for later use.

Ingredients and allergens are provided as strings. One set happens to be in English and not the other, but that’s storytelling. From a solving point of view, it doesn’t matter. What matters is they’re a different type of string, so I’ll newtype them to avoid using one kind instead of the other when I’m not paying attention.

Poking around the data, my input appears to consist in 39 recipes, listing a total of 8 allergens spread among a list of 200 ingredients.

Now to actually identify guaranteed-safe ingredients as the statement requests.

This is where I initially got stuck. I couldn’t for the life of me figure how an ingredient could ever be ruled out from being allergenic. After all, allergens are never guaranteed to be listed, so what’s preventing an ingredient from containing trace amounts of that spooky allergen, and not being reported in a single food item as the statement explicitly allows? I have no way of telling it apart from an actually safe ingredient, have I? So there can be no safe ingredients at all, this statement doesn’t make any sense!

As the coffee started to kick in, I finally found the key sentence. Hidden in plain sight as the leading one in paragraph 4.

Each allergen is found in exactly one ingredient.

Each recipe gives us a bit of information about the allergens. It doesn’t really tell us which is which unless we’re given pure ingredients as foods2, but it does constrain the set of ingredients that are known to carry those allergens. By cross-referencing them with the constraints from other recipes, I can get at least some information as to which ingredients could carry each allergen.

I’ll work bottom-up, first extracting a map of possible carriers from a recipe.

And then I’ll work across recipes to generate the set of ingredients who remain in any allergen’s carrier set.

Only 8 suspicious ingredients. For a total of 8 known allergens! That cross-referencing didn’t bring up “a bit more” information, it gave me “just about all” of it.

And definitely enough to complete part 1. I’ll just write a small helper to count how many ingredients from a set occur in a recipe.

And I’ve got all I need to complete.

I could implement a backtracking search as I did a few times already this month. But the problem space here is really small. An exhaustive search is going to be much easier to write.

We’re looking for a one-to-one mapping from allergen to ingredient. More specifically, we’re asked to provide it in alphabetical order of allergens. I’ll switch to lists so I can introduce that notion of ordering.

Building a matching from two ordered lists of allergens and ingredients is trivial.

The specific canonical matching we’re looking for is in order of allergens, so I’ll refine.

A matching is the correct one if it can’t be proved wrong. To take a jab at it, I’ll check its consistency with regard to a provided recipe.

If we know the full allergen-to-ingredient relation list, we know a food item’s actual allergen list exactly. So the consistency check is simply that the reported list of allergens is indeed a subset of the full list of contained allergens.

By checking for consistency across all recipes, I can filter the choices as good as can be.

And that’s all there is to it! Here’s the end of the program for completeness.

This concludes this day’s solution. Coffee aside, it was actually harder to present than to code. :-)