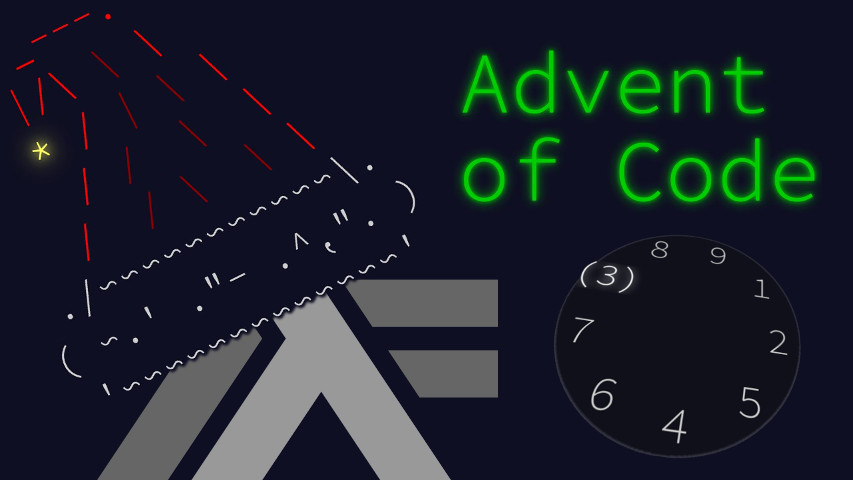 Today’s challenge revolves around optimizing a circular list stitch-and-patch procedure. Part 1 serves as appetizer; the real meat is in part 2, where the circle is a million items long instead of nine, and the number of operations ten millions instead of a hundred. This post is a literate Haskell program.

The gist of the procedure isn’t too hard to implement. It could reasonably be done for part 1 using a Sequence of Ints, or even a simple list.

The issue is scaling it up to part 2.

The key observation is that no matter the representation, we need a fast access operation to a move’s destination. This is trickier than it looks.

But first the cause. The procedure involves moving three adjacent cups from a spot on the circle to another. This is a globally logarithmic operation on Seq. So our general complexity is
O(R×(cost(access cursor)+cost(access destination)+logN))

The cost of accessing the cursor can easily be kept O(log N) by storing its position alongside the circle, or by always shifting the Seq to it and keeping it at index 0. The cost of accessing the destination, on the other hand, is that of a linear scan if we don’t do anything smart about it. That would bring the complexity to O(R × N), which is too much, so we have to do something about it.

Any attempt to store indices is going to have to confront itself with the cost of updating them when the strings of 3 are moved around. It’s going to be too much as well.

So an idea would be to store a cup’s destination in a representation that isn’t affected by our shifting stuff around. One way to do this would be with an explicit node representation:

But that doesn’t solve everything. We still need to keep track of the editing that goes around. And using any container-based approach hits the same class of problem: we either need to update half of the circle at each move or can’t do anything useful with the Node accessor.

The solution is to move the structure information to the node and make it mutable.

Now the whole circle can be addressed from just a Node. We still need to allocate all of them, and we know how many we have in advance, so we can store them in an array.

But… if they have a stable offset in the array, like, say, their label, we don’t need to store a destination link at all, we can compute it in constant time given a label!

But then we can just simplify that node type to a simple integer: its clockwise neighbor .

So my state is an array of cups indexed by cups, representing the next one in the circle. With the cup labels being 1-based, this has the added bonus that I can store the link to the current cup right there, at index 0.

Now the data type is stable, I can implement the move as a straightforward transcription of the statement to this linked list encoding.

Then the cups are picked up.

For list editing purposes, I only need to know the first and last. Next I cut them out of the circle by having the current cup skip to the first cup after the pickup.

The destination is usually one less than the current by default. But it does happen that we need to skip a few numbers.

I can now insert the segment right next to the destination cup.

There’s no need to rewire the picked up cups internally: they remain in the same order with regard to each other.

Finally I update the link to the current cup.

I used a toList derivative so I didn’t have to chain too many readArray operations, but it doesn’t really follow the Foldable typeclass signatures. I define it as such:

Initially I used unsafeInterleaveST and a lazy infinite list, but I figured that didn’t buy much when I actually always knew in advance how many items I needed.

Now playing a game is a simple matter of intializing the structure and repeatedly applying moves. I allow information extraction by taking an ST-based continuation as a parameter.

I can now perform the part 1 game.

For part 2, I’ll use a helper to expand the initial list.

Playing the game takes significant time interpreted. I packaged it with a main function for compiled execution. It takes about 10 seconds.

This concludes today’s solution. Hope you enjoyed it, and see you tomorrow!